Who is Jesus Shuttlesworth? Explaining Spike Lee’s He Got Game 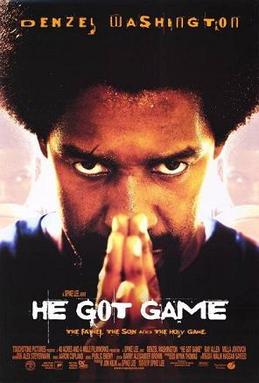 Spike Lee’s He Got Game is a multilayered masterpiece that needs to be dissected. It looks like a motivational sports movie at first glance; but upon a closer look, it slowly turns into the dramatic storytelling of an incredible father and son tragedy. As it tells the story, it paints a background that is rife with a rich picture of the African American experience in modern society. Who is Jesus Shuttlesworth?

Jesus Shuttlesworth is a fictional character from the Spike Lee Directed movie He Got Game. He’s a high school basketball phenom from Coney Island confronted by the difficult choice to either go to college or jump directly into the NBA. In the movie, the damaged, conflicted, and real-life NBA star Ray Allen portrays the responsible role of Jesus Shuttlesworth. Although this story isn’t a part of NBA history, it’s certainly celebrated in NBA and basketball culture.

He’s a damaged character of a boy who had to grow up into a man quickly because of an abusive father who turned into an absentee father due to incarceration. His mother, whom he loved dearly, died in the hands of his father in a domestic altercation. His sense of responsibility was also tested because when his mom died, and his father was behind bars, he had to take care of his little sister. He essentially skipped the formative years of young adulthood to become both a big brother and a parent to his sister.

Moving from high school straight to the professional league is a decision that not a lot of great players make. Even the arguably the greatest player of all time in Michael Jordan felt like he needed to go to college before going pro. Jesus Shuttlesworth, however, is portrayed as once in a lifetime player who can compete at the highest level of the sport at an early age. This talent is a huge anchor for this confusion and conflict. He values education, but at the same time, he values giving his sister and himself the best position to be in the present. Choosing to go to college secures his future; choosing to go for the NBA secures his present. In the movie, he has to choose between the two.

His independence is also in full display. With his decision to go to Big State not for any other factor aside from it being the best choice for himself and his sister is a choice made by a mature and independent young man. He made this decision even without any positive role models in his life.

Who Was Supposed to play Jesus Shuttlesworth?

Kobe Bryant was originally supposed to play Shuttlesworth. “Thank you but no thank you,” Bryant says. “This summer is too big for me.” And then, Ray Allen ends up snagging the historic role as Shuttlesworth. The history of the NBA almost went in an entirely different direction. Had Kobe accepted the role, maybe Ray Allen wouldn’t have gone on to make more three-pointers than anyone else in NBA history!!

Was Jesus Shuttlesworth a real person?

While the fictional character is not solely based on one single real-life person, his story is extremely similar to Stephon Marbury’s life story. Some even say that the movie is based on Marbury, but no one would ever admit that.

Jesus came from a similar background in the Coney Island and even went to the same high school as the fictional Jesus Shuttlesworth. He was also faced with the same dilemma after he led his team to a national championship. Other individuals that came from Coney Island, Brooklyn also claim that the story was about their life. So, it seems that multiple similar real-life stories are similar to Jesus Shuttlesworth’s story.

Upon looking deeper into the character and the number of people who claim that it’s their story, there seems to be a pattern. In a way, Jesus Shuttlesworth is the story of every African American man who has to choose between what is best for himself and what is best for the others around him because those are the only two choices available. This is an important aspect of the film because more than a basketball movie, it’s also a film about the African American experience in the American society wherein choices are not plenty.

How did Jesus Shuttlesworth’s mom die?

His mother died at the hands of his father. As they were having a marital dispute, Jake Shuttlesworth, his father, shoved his mother in anger. This resulted in an accidental fall where she hits her head on the floor and dies due to the trauma. This is the reason why Jake is in prison.

It’s a pivotal event that led to a dramatic transformation in both father and son. It seems that her death was the catalyst for their becoming better human beings. It propelled Jesus to become more assertive and generally, a stronger person who does not quit when faced with adversity. With Jake, on the other hand, her death results in his becoming more of a caring person. While we don’t see this in his approach to Jesus, this is on full display in his interactions with a random maltreated prostitute in Dakota Burns. Her death, it seemed, turned Jake’s heart a little bit softer – far from the tough love kind of heart that led his son to loathe him even more. In the movie, Jesus says, “Basketball is like poetry in motion. Just comin’ down the court, you got a defender in your way. You take him to the left. You take him back to the right. And he’s fallin’ back, and you just “J” right in his face. And then you look at him, and then you say, “What?”

In any sport, perfection in playing the game is demanded of the athlete. This much is portrayed by the way Jake trained Jesus before he was incarcerated for killing his wife. In the earlier scenes of the movie, he trained his son not to let anger get the best out of him on the court. This elimination of anger as a factor in the way he plays is a testament to how seriously Jake takes the game of basketball. In Jesus’ line, he describes how, in basketball, one needs to be able to manipulate the movements of his defenders to score effectively. Anger, as Jake showed, is a way to manipulate people into making mistakes on the court.

There is, therefore, not a place for anger in the basketball court. Then, a basketball game is a place of perfection where moves had been practiced countless of times and players had been trained to execute plays to perfection.

Furthermore, the sport of basketball itself demands perfection from the competing teams. Each player has a role to play. Victory, most often, is anchored on the player’s ability to play their role perfectly as the coach designed it.

Like basketball, poetry demands perfection. The limitedness of the word count forces the poet to make use of every single word in an exacting way. Each line has to interact correctly with the last one to get the message across to the readers. Each word plays a role in making the reader see the bigger picture. This demand for perfection from every small part makes basketball poetry in motion.

What college did Jesus Shuttlesworth go to?

The most inspiring aspect of the movie is how he chose to go to Big State just because it’s the best choice for both himself and his little sister. It provided them both with a good education and an excellent chance of getting into the NBA in the future.

The absence of his father’s influence on his decision is what makes this choice so admirable for such a young man. In a way, it’s a display of what his father has been teaching him all along. At the beginning of the film, Jake was teaching him not to let anger affect his game. Whether it was intentional or just a coincidence, Jake’s request for Jesus to go to Big State was a deeper lesson in not letting emotions dictate his choices.

Jesus Shuttlesworth and his relationship with Lala

Spike Lee’s depiction of women almost always leaves feminists with something to be angry about. This movie is not the one to save Lee for the feminists. For one, Martha Shuttlesworth seemed like a helpless housewife in the movie. She’s a stereotypical doting mother who shouts out from the apartment building window to Jesus in the basketball court when it’s time for supper. She’s a generally submissive wife who, in domestic squabbles, get the brunt of a violent exchange with her husband. Her submissiveness ultimately led her to her death.

Lala Bonilla, Jesus’ girlfriend, is the complete opposite. She’s a strong woman who can handle herself among men albeit in her way. For example, she cheats with D’Andre and admits it to Jesus. She enjoys being pampered and being treated like a queen. In one scene, she even has her nail polish done by the budding basketball superstar. She relishes in having the attention of the man whose focus everyone else wants to command.

However, from the very first scene, she shares with Jesus, an air of uncertainty surrounds their relationship. She seemed more interested in Jesus’ future than his present. In her very first line, she prods him about his impending decision. Just like the coaches and scouts, she was interested in his potentials and not in his present well-being.

While Jesus truly loves Lala as evidenced by his actions, certain aspects of their relationship don’t seem to conform to the traditional boyfriend-girlfriend relationships. Aside from the peculiarities already mentioned above, Lala functions more as a gatekeeper than a girlfriend. “He’s a friend of the family,” she says of a talent scout who wants to get a sales pitch through to Jesus.

He Got Game storylines and plot breakdowns:

He Got Game is one of Spike Lee’s most loved films. In it, he doesn’t only paint the picture of an extremely gifted athlete, but that of a more relatable son whose father committed a heinous mistake. Jake’s accidental killing of his wife is a mistake that will haunt both men for as long as they live. It’s a pivotal moment for the two men whose lives changed immediately after it happened. The event’s indelible mark is evident in Jesus’ refusal to forgive his father even if his sister already has. This event triggered him to become the man of the house both figuratively and literally. As he lost his mother, he also lost his father. He had to grow up into a man quickly to be able to take care of his little sister due to their absence.

Jake, on the other hand, has experienced a transformation of his own. Shown in the stark difference of his treatment between his wife and Dakota Burns, a prostitute whom he befriends and treats nicely.

The game of basketball ultimately reunited them. The same game that initially planted resentment in Jesus’ heart which eventually became full-blown loathing when Jake killed his mother. This is where Spike Lee’s love of basketball shows the best. He uses it as a unifying agent between a father and son who might as well be oceans apart.