How Tall Is A Basketball Hoop? 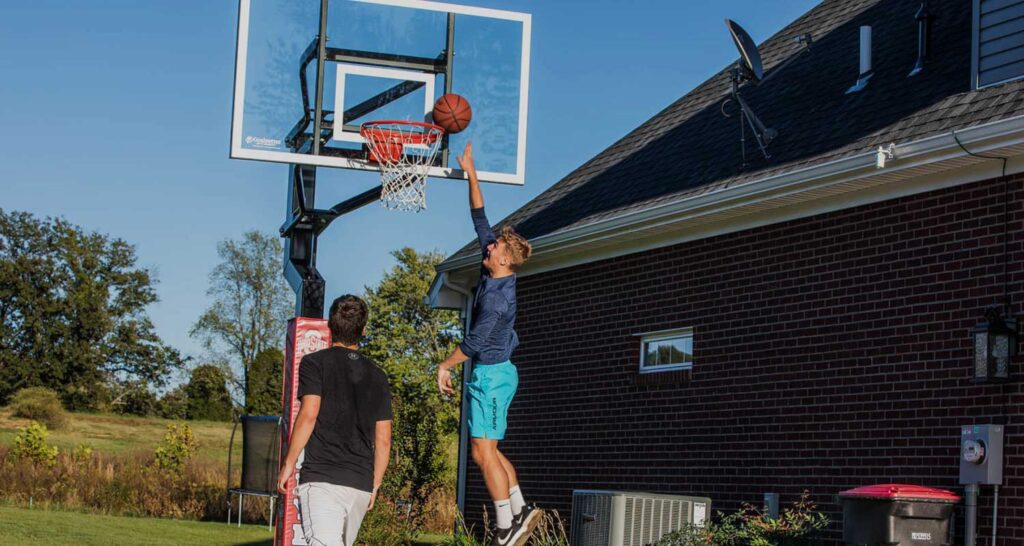 The height of a basketball hoop is the most important basketball measurement – if you master it, you can score on the court from anyhwere.

There is no denying that basketball is an exciting sport. It has one of the most challenging schedules of any sport and the tides of a game can turn under just a few minutes. This is just a few of the many things that makes basketball so exciting.

Maybe you are an NBA fan or maybe, you prefer the WNBA. Whatever the situation is if you are going to play like your favorite teams you need to understand the regulations.

Consider The Size Of The Court

When most people think about sizing their hoops they don’t tend to think about the size of the court in general. The general size of the court can play a dramatic role in which is the height of the hoop is set. For instance, if you don’t have much running room, you might prefer a lower hoop so that you can dunk easier. Most typical NBA courts are 94 feet long and 50 feet wide. The NCAA and WNBA will use courts that are identical. NCAA and WNBA courts are exactly 94 feet long by 50 feet wide. High school courts fall a bit shorter as they are only 84 feet long with a width of 50 feet. Junior courts shrink down even further to the size of 74 feet long by 42 feet wide.

These are the official sizes of the courts based on each individual basketball league. However, it should be noted that when it comes to FBIA courts they are regulated at 91.86 feet by 49.21 feet. These are the types of courts that will be used for Olympic and international gameplay.

In order to understand the height of the hoop, you need to understand the entire setup of the rim. A basketball rim alone would not be considered a regulated basketball hoop. In order for the system to be par with professional regulations, you are going to need a backboard. A backboard is nothing more than a vertical board that has a hoop attached to it. Sometimes these boards are constructed out of wood and sometimes they are constructed from plexiglass type materials. Most backboards that are used in professional NBA and WNBA will consist of rectangular designs. However, when it comes to recreational hoops the player has a number of designs and styles to choose from. If you want to play like the pros, you will want to opt for a backboard that is rectangular in size.

The Height Of An NBA Hoop

With a little bit of research, you will find that the official height of an NBA hoop is approximately 10 feet. This height was designated when the game was first invented. It was a game that was created by James Naismith and he drafted the first initial rule set to the game. It is pretty strange to say that over 125 of existence the official height has remained the same.

The Height Of The WNBA Hoop

It should be noted that the height of the WNBA hoop stands at 10 feet as well. This is the exact same for the NBA league.

The Height  Of The NCAA Hoop

The height of the NCAA hoop is also ten feet from the ground, but there are some adjustments to the backboard. For instance, in order to be considered regulation the backboard must be 6 feet wide by 42 inches tall. The hoop will be 18 inches in diameter.

It should be noted that the height of international hoops, even those in Australia are considered regulation at 10 feet.

The NBA made a special exception for the 2009 Slam Dunk competition when Dwight Howard dunked on a 12 foot high basketball hoop. What was remarkable is that he dunked quite easily, leading speculators to wonder if he could dunk on a 13 foot, 14 foot, or even 15 foot basketball hoop!!