After Thunder struck by Durant departure, what should they do with Westbrook? 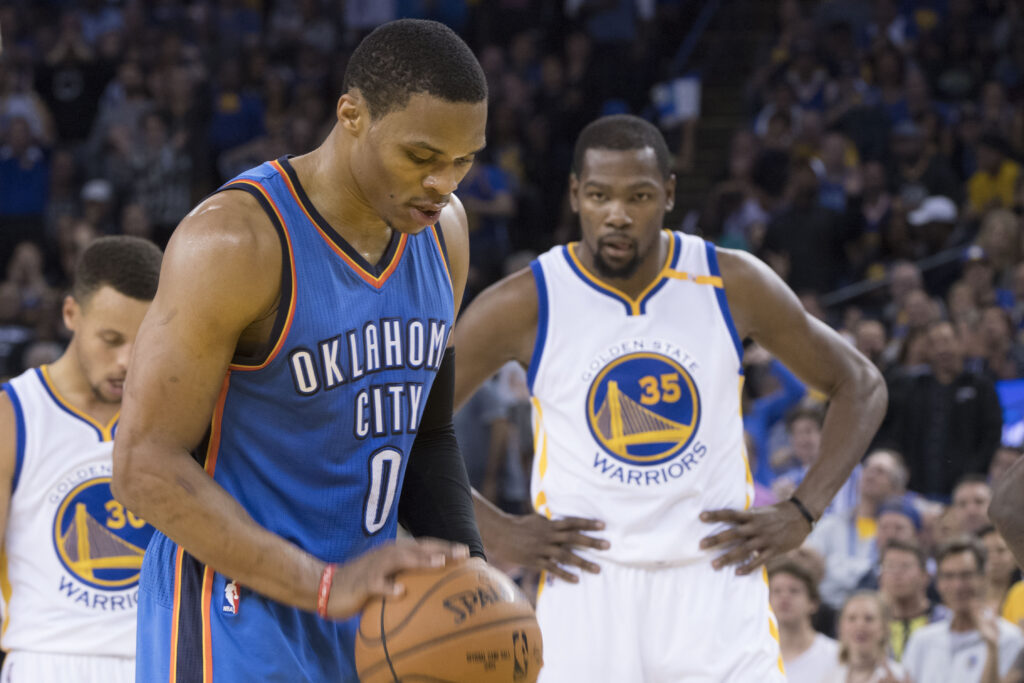 You’re Oklahoma City Thunder General Manager Sam Presti. Kevin Durant just bolted for the Golden State Warriors. You lost a superstar for nothing. Ouch. But unlike Thunder fans, you don’t have the luxury of time to mourn Durant’s decision. Burning his jersey won’t cut it—you need to think ahead. So what does Durant’s move mean for your chances to retain your other superstar, Russell Westbrook? That’s the natural and anxiety-provoking question for a Thunder executive right now.

Westbrook becomes a free agent in the 2017 offseason, meaning the Thunder face the potential catastrophe of losing their second franchise cornerstone in as many years. Durant wound, meet the Westbrook salt. Losing the elite point guard for nothing to a major market like Los Angeles or New York is a real and frightening possibility for this small market team. So do the Thunder cut their losses and deal Westbrook now for some assets, launching the rebuilding process immediately? Do they wait until the next NBA trade deadline to reassess the post-Durant era? Or do they roll the dice again next offseason, hoping (and praying) that they can sell Westbrook on being their undisputed franchise player in the long run?

Given the presumably slim chances of attracting another superstar to Oklahoma City through free agency, the team’s first question should be: Even if we can retain Westbrook a year from now, can we build a contender with him as our only superstar? As it turns out, the Thunder have more to work with here than pure speculation.

In 2014-15, an injured Durant missed two-thirds of the season, giving Westbrook the keys to the team. The result was a statistical explosion for the already prolific guard, who averaged 28.1 points, 8.6 assists, and 7.3 rebounds per game. Westbrook still stuffed the stat sheet with Durant returning this past season—23.5 points, 10.4 assists, and 7.8 rebounds nightly—but it’s clear that his scoring would go up in a post-Durant era.

Yet as far as the team goes, Oklahoma City finished the 2014-15 campaign with a 45-37 record, and more importantly, they missed the playoffs with Durant largely in street clothes and Westbrook as their alpha dog. If they want a larger sample size, they can try letting Westbrook fly solo again for half a season before the trade deadline, but it won’t be enough to compete with elite Western Conference teams like the Warriors, the San Antonio Spurs, or even the Los Angeles Clippers. And the long-term goal is to contend for a championship, not for the 4th seed in the playoffs, right? With this in mind, the Thunder should deal Westbrook for multiple assets and rebuild. Presti has proven adept at building through the draft: witness his successful selections of Durant, Westbrook, James Harden, and Serge Ibaka. Only one of the four is left in Oklahoma City. It’s time to wipe the slate clean and start over.

Then the question for Presti becomes, when do you trade Westbrook? Well, it’s hard to argue that Westbrook’s value will get any higher than it is right now. We’ve seen his stats and impact with Durant, and we’ve also seen what he can do (and what his team can do) without Durant. He’s a top 5 player in this league. Why wait and risk a potential deterioration in his value, either through injury or individual/team struggles on the court without Durant? The Thunder will get a better deal now than they would at the February 2017 trade deadline. At the deadline, trade partners would perceive them as more desperate because Westbrook’s impending free agency departure would be that much closer. If the Thunder decide to go ahead with a deal, the right package can’t conceivably bring back a star of Westbrook’s caliber, but it can still include an enticing mix of players and draft picks. The right trade partner, meanwhile, needs to have either the assurance of re-signing Westbrook in free agency, or less likely, enough incentive to rent him for half a season even without an assurance of keeping him long-term.

So who might be those potential trade partners for the Thunder? That’s a topic for another day and another column…stay tuned.