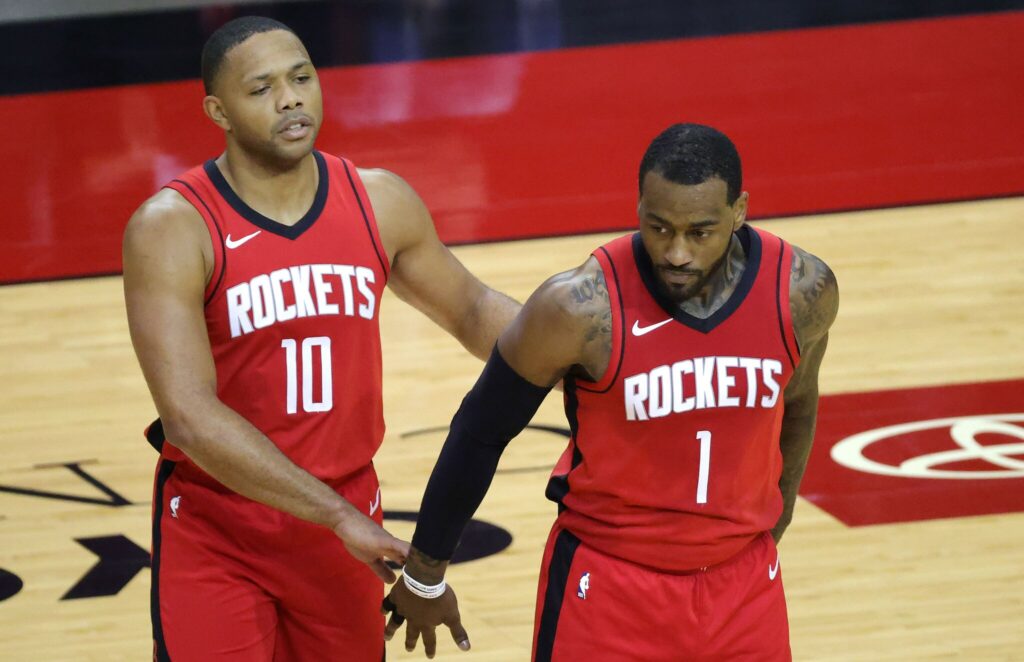 We’ve already established that the Thunder, based on the past experience of missing the playoffs with a team led by Russell Westbrook and missing an injured Kevin Durant, would be best-served by trading Westbrook for multiple assets to launch their post-Durant era. We’ve also established that Oklahoma City will get the best package in return for Westbrook now, during the NBA offseason, as opposed to February’s trade deadline, when they’d be perceived as a more desperate negotiating partner. So without further ado, here are five offseason trade scenarios for Westbrook. And in the event that the Thunder can’t strike a deal now, my next post will offer five potential Westbrook trade scenarios for the trade deadline.

Westbrook goes to his hometown team in southern California, and the Lakers would probably be confident about re-signing him next offseason. The Lakers satisfy their fans by getting a proven superstar for the post-Kobe era, rather than taking the risk that Russell and Ingram—the last two second-overall picks in the NBA Draft—don’t develop into “Westbrook-caliber” players. The Thunder assume that risk instead, but the upside is huge for them here. In fact, Ingram has drawn comparisons to none other than…Kevin Durant. If I’m Thunder GM Sam Presti, I make this deal in a heartbeat.

Are the Lakers giving up too much? Maybe so. But offloading Young, who just earned himself some renewed infamy by picking up an exploding firework, might be an added bonus for LA. And given the huge contracts they gave Timofey Mozgov (4 years, $64 million) and Luol Deng (4 years, $72 million) this offseason, their chances of signing Westbrook as a free agent without trading for him beforehand are not as clear as they once were.

Boston adds another star to pair with newly signed big man Al Horford, instantly becoming the top challenger to the Cleveland Cavaliers in the Eastern Conference. Oklahoma City gets two talented and complementary point guards—a solid defender in Smart, a top scorer in Thomas—to replace Westbrook, while Crowder slides into Durant’s small forward spot. The Brooklyn Nets’ pick (owned by Boston) is widely expected to fall in the next draft’s top 5—and Presti built the Thunder’s Westbrook/Durant-led core through the draft, after all.

It’s another great package for OKC, but can Boston be confident about re-signing Westbrook next offseason? Let’s say the Celtics make the NBA Finals, or even just the conference finals—is that enough to assure themselves of retaining Westbrook. Per NBA salary cap rules, they’d be able to sign him to a larger contract than any team he’d leave for, but Westbrook would still likely listen offers from the big-market teams in New York and LA. It’s a very risky proposition for Boston, especially given all the assets they’d surrender.

After two seasons, the jury is still out on Wiggins, the top pick in the 2014 draft—but I can’t envision a more talented successor to Durant at the Thunder’s 3 spot. Rubio is talented but flawed at the 1—a strong distributor, but a weak shooter and injury prone. But at the worst, Rubio splits time in OKC with another young point guard, Cameron Payne (and initially, he probably gets more playing time than Payne). I do this deal if I’m the Thunder. But for Minnesota, inserting Westbrook into a rising young core including big man Karl-Anthony Towns, guard Zach LaVine, and rookie Kris Dunn is enticing. Speaking of Dunn, Minnesota might need to follow up by trading him because he plays the same position as Westbrook—that is, if the Wolves think traditionally rather than outside the box about their lineup.

Either way, the move catapults the Timberwolves into instant relevance—as things stand, they have the NBA’s longest playoff drought (12 seasons). But should they disrupt what is already a promising young collection of talent? And like Boston, can they even re-sign Westbrook in 2017? They might consider trying out Westbrook for half a season and seeing if they become a contender. If they don’t contend, and it they don’t like their chances of retaining him as a free agent, they can trade him at the deadline. But would they get a package that’s better than what they gave up for Westbrook in the first place? It might just be too much trouble for Minnesota.

Like Minnesota, Sacramento could become relevant again by acquiring Westbrook. The Kings haven’t made the playoffs for a decade—a drought that trails only Minnesota’s. After Cousins tweeted “Lord give me the strength” in response to their relatively unknown 2016 draft pick, Greek center Georgios Papagiannis, the Kings may benefit from moving on from the malcontent Cousins as their franchise player. So why would the Thunder do this deal? Cousins, like Westbrook, is a statistical giant at his position—26.9 points and 11.5 rebounds per game last season. “Boogie” might also benefit from a change of scenery. The Thunder get a new star (at least on paper) who’s under contract for two more seasons at a reasonable total of $32 million. They could even offer to extend his contract now in exchange for raises the next two seasons, like the Rockets just did with James Harden. OKC gets to offload the remaining three years and $54 million on Kanter’s contract—let’s face it, they matched Portland’s huge offer to the one-dimensional big man last year to avoid losing an asset amid their effort to retain Durant, who’s gone now. OKC also replaces Durant and Westbrook with Gay and Collison—they aren’t overwhelming, but they’d be at least serviceable at the team’s 1 and 3 spots for now.

Yet again, we arrive at the most important sticking point of any Westbrook deal: Can the Kings retain him in free agency? Conventional wisdom says they can’t. But like Minnesota, Sacramento can experiment with Westbrook on their team for half a season, and if they don’t make the jump to contender status, trade him at the deadline. Because honestly, they’re the Sacramento Kings. They haven’t made the playoffs for a decade and their existing young core isn’t as exciting as Minnesota’s. Why not take a risk? How much worse can things get for your team, anyway?

It seems that throughout this offseason, nobody has even once uttered the words “Anthony Davis.” That’s right, after an injury-plagued 2015-16 season that ended without a playoff appearance for the Pelicans, a big man many regard as a top 5 NBA player is suddenly irrelevant. So what about pairing him with Westbrook, another top 5 player in this league, and seeing for at least half a season what your new 1-2 punch can do? Like Minnesota or Sacramento, if it doesn’t work out and you seemed destined to lose Westbrook in free agency, you can trade him at the deadline. A superstar pairing like Davis and Westbrook might be worth a roll of the dice, even if it’s just a “big 2” rather than teams’ usual goal of becoming a contender by building a “big 3.”

The Thunder, meanwhile, replace Westbrook at point guard with a decent option in Holiday—16.8 points and 6 assists per game last season (though Holiday, like Westbrook, is a free agent in 2017). Hield would need to battle for minutes at shooting guard with newly acquired Victor Oladipo, but the Oklahoma college star would give the Thunder an instant fan favorite after Durant’s departure. Those OKC fans could use a morale boost, right? The future draft picks sweeten the deal, though it’s unclear how high those picks would be. If New Orleans retain Westbrook in the long run, they might be late first-rounders. If they don’t retain him and/or trade him midseason, OKC gets more value out of those picks. That’s the gamble. But ultimately, this particular package of assets may not be enough to entice the Thunder.

Do any of these deals happen?

The most realistic and mutually beneficial proposal here is Westbrook to the Lakers. LA has a great chance of retaining him, and OKC gets two young players with significant upside in D’Angelo Russell and Brandon Ingram. Maybe it isn’t too crazy for the Thunder to dream that five years now, those two might become the next…Westbrook and Durant. In that case, the Lakers would lose such a deal in the long run, but they couldn’t be criticized too much for acquiring a proven homegrown superstar like Westbrook for players who, at the time, were largely unproven.

That said, the Lakers should stay put for now. They’re likely to get a better deal for Westbrook at the trade deadline, when the Thunder are more desperate.

As far as the other proposed deals go, the common theme is: Can those teams retain Westbrook long-term, and is a half-season or full-season rental without such an assurance worth the risk? For Sacramento and New Orleans, I’d take the risk. The Kings stand much to gain and honestly, they don’t have much to lose. A Davis-Westbrook experiment is too enticing for the Pelicans to pass up, especially for the moderate price they’re paying. But are the Thunder getting back enough in my proposals with Sacramento and New Orleans? Chances are they say no.

If I’m Minnesota or Boston, I don’t do the proposed deals…at least not in the offseason. The Timberwolves’ core might have more upside as currently constituted than it would after they exchanged multiple assets for Westbrook. The Celtics—as my colleague Eitan Rosenberg has argued here—are already in good position to become a contender in the East and shouldn’t rush into a big trade just for the sake of dealing, especially without an assurance that Westbrook would re-sign. Like the Lakers, or any of the other teams discussed here, Boston can get a better for Westbrook in February. That’s why you should stay tuned for Part 2 of this column…five trade scenarios for Westbrook at the trade deadline.